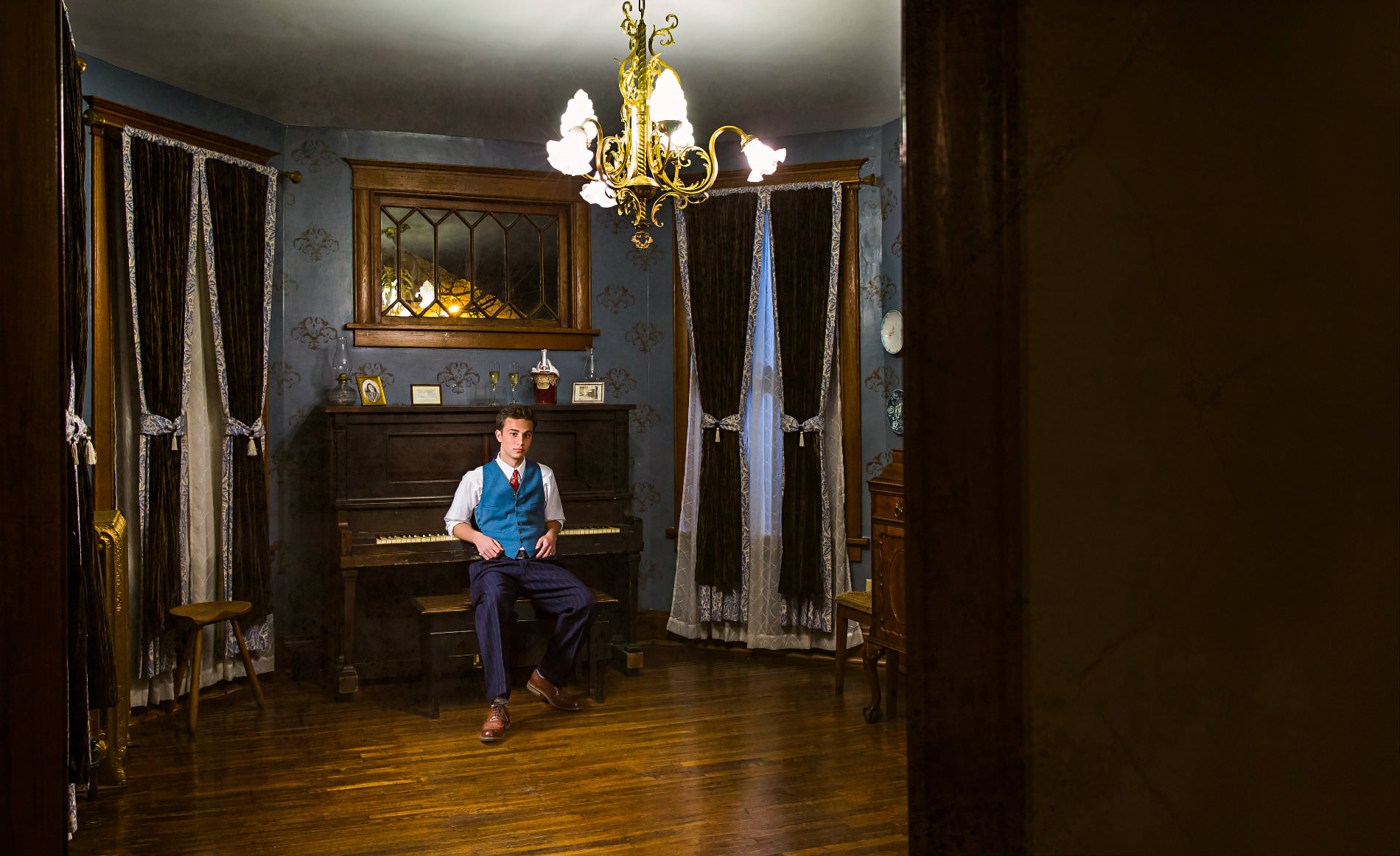 History of our Bed and Breakfasts

The history of the Spy House traces back through several decades, but only two different owners. The house’s claim to fame is due to a former tenant, David Greenglass, who is linked to the Rosenberg spy case.

The Spy House was built around 1912 in historic downtown Albuquerque, New Mexico. At the time it was built, the Spy House, an Arts-and-Crafts-style home, was different than the neighboring Victorian-style houses. After its construction, the house went through a variety of owners until it was purchased in 1944 by WB Freeman and his wife Margaret. At the time they bought the house, the three upstairs rooms were being used as boarding rooms. The Freemans continued to use it this way and lived in the downstairs part of the house with Margaret’s father, Pete Scherer. The Freemans became one of the most well-known and longest owners of the house.

Shortly after purchasing the house, the Freemans were approached by Ruth Greenglass, wife of David Greenglass, who wanted to rent one of the upstairs rooms for $32 a month. David Greenglass just happened to be the brother of Ethel Rosenberg and brother-in-law of Julius Rosenberg, convicted Soviet spies who were executed in the 1950s. David was in New Mexico to work on the atomic bomb in Los Alamos during the week and would join his wife in their one-room apartment on the weekends. On June 2, 1945, David was greeted by Harry Gold, a Soviet spy courier, to receive drawings of the portion of the atomic bomb on which he was working. David exchanged these drawings with Gold for $500 in their room in the house. It was due to this incident that the house became known as “The Spy House”. You can find mention of the house in several books, as well as in numerous newspaper articles written throughout the years.

The Freemans continued to be the owners of the house until Margaret passed away in her 90s. After her passing, the house remained in a family trust for a couple of years and was then placed on the market. As soon as it was put on the market, the infamous history of the house was once again in the papers. It was due to this publicity that Steve and Kara Grant came across the house and decided they couldn’t pass up the opportunity to own a little piece of Albuquerque’s history. After purchasing the house, they worked very hard at meticulously restoring the house back to its original glory. Renovations included everything from taking out five kitchens in the house, repairing walls, and restoring floors. It still has the original dark stained woodwork throughout, as well as beautiful lead glass transoms and French doors. When you walk through the door, you are greeted by the large grand staircase, one of the first things that caught the Grants’ eyes when entering the house. Special care has been given to furnishing the house with antiques that highlight its beauty. They have tried to convey the rich history of the house by leaving the original apartment numbers on each room. The “Freeman Apartments” plaque, which at one time hung in the front of the house, now hangs in the front entry. You will truly feel all of the rich history of this house when you come to stay in it.

Click here to view articles about The Spy House history.

The Heritage House was built around 1907 in the Huning Highland Historic District of Albuquerque. The historic district got its name from Franz Huning, one of the developers of the district. This district was developed to accommodate the many individuals moving to Albuquerque from the east in the 1800s when the railroad came to Albuquerque. This accounts for the more Victorian style of the home, which is unusual for this area, due to the heavy influence of the Southwest adobe style. The Heritage House is a Dutch colonial home that is otherwise known as the “Simpson House” in some records because the Simpson family was one of the longer owners of the home; they owned the house from 1922 to 1950. The house has had a variety of owners, from physicians and telegraph operators, to employees of the surrounding hospitals. From the records we have found, the house has always been a single-family home – something rare for many of the homes in this historic district.

The Grants acquired this home in 2004, and they immediately began a very extensive restoration of the property. Much of the plaster on the interior walls of the house needed repair, which they first attempted before realizing that much of it would have to be removed. After the plaster was removed, they were then able to insulate the walls. This was only the beginning of a very labor intensive renovation. The Grants did everything from stripping several layers of paint off of the stairway to having the floors sanded and restored to their original beauty. To give the house some modern conveniences, they also put new central heat and air in every room of the house, as well as running cable to each room so that their guests could enjoy their own TV.

After most of the renovations were done, they began to collect antiques and decorate each of the rooms. Kara personally took on this task by carefully selecting colors and fabrics that would create a unique feel in each of the rooms. She then personally made the bedding and curtains for each of the rooms. Kara wanted to give each guest room a very personal finishing touch, so she gathered a collection of family heirlooms from each of the Grants’ families, as well as some of their close friends. In fact, it was the wonderful contributions from friends and family that gave the Grants the inspiration for the house’s name. Not only does the house have a rich heritage, but much of the furnishings do as well, making “Heritage House” a very fitting name for the place.

Click here to read articles about The Heritage House history.

The Boarding House was built in 1906 by William. William was actually the carpenter who worked in the Cabinet House, and his workshop was in the home. Later, the house was sold to Miss Butts, a superintendent of one of Albuquerque’s first schools. Occupants after that started using the house to rent out rooms to boarders. The house has gone through a lot of structural changes. For example, the Bessie Room was added on to the house, which explains the slight slant of the ceiling in the rooms. The bathroom in the Trudi Room was in the other half of the Bessie Room and the windows in the current bathroom were actually outside before the addition. When we purchased the house, the bathroom was actually a closet. The kitchen was also another room, but the owners before the Grants turned the room into the present-day kitchen. Some of the most amazing features of this house are the turret in the front – which displays the windows of the Trudi Room – and the beautiful carved wooden pillars in the entry of the house.

Steve and Kara purchased the Boarding House after adding the Spy House as part of the bed and breakfast. When they moved into the house, they weren’t able to make as many improvements to the house as they wanted, because they were already trying to raise their family in the house and run the bed and breakfasts at the same time. However, in 2014, once their children were all growing up and starting their own lives, Steve and Kara decided to add the Boarding House to the rest of the bed and breakfast and move to a smaller house of their own. Full renovation of the house started up then. As part of the renovation, they also decided to convert the back part of the house and all 1200 square feet of the basement into personal space, including an office for the business. While renovating this space, they also added a kitchen for their own use. This part of the house is still used by all of the Grant family. With Ethan, Jacob, and Jacob’s wife attending UNM nearby, it serves as the perfect gathering place for all the family to come together and catch up with each others’ busy lives.

That being said, the Boarding House is still being used the same way it has for so many years. It serves as a boarding house for guests coming to Albuquerque, as well as boarding the Grants and their expanding family, and all of their friends. The Boarding House is the perfect name for this house of multiple boarders.

“I really enjoy this place. It’s nice and exciting! I wish that my family and I would live here! This is the best place I have ever stayed in! I hope your business goes well. Thank you!”